Three EVSers with different cultural background have unified their force in a voluntary program “Refugee Culture”. Stergios from Greece, Sara from Afghanistan and Axel from Iraq came almost a month ago to the Open Cultural center in Barcelona.

“Actually I could not finish my High School because it was not safe especially for girl or woman(in Afghanistan)” said. She has been in New Cavala’s camp as a volunteer helping some other organisations. “That way made me more patient of knowing about different cultures. I like to travel, listen to music, and dance. ” 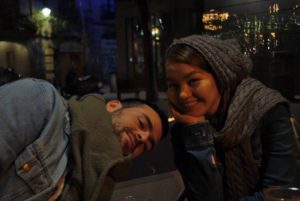 Axel is from Baghdad city. He has a lot of dreams .. “I have a lot of dreams. One of them is to help as much as possible of children who do not have parents and they live in the streets, and also to work as a teacher. ”

The Greek one is Stergios .. He loves to listen and play music, to hike and explore new cultures and languages. As he said:, “After finishing this volunteering maybe I will do a master somewhere in the world.”

Three people from Europe and Asia came to our organisation to learn from us and we to learn from them. They explore the city and the countryside around it. Sara uses this to cook her spice Delicious food and she makes bread one time per a week. Axel eats as much as he can as he’s in a competition and Stergios.

A group dinner for a lot of coworkers took place the other day. Eventually, no one could move out of the chair or to do something after eating all those meals that guys had prepared. 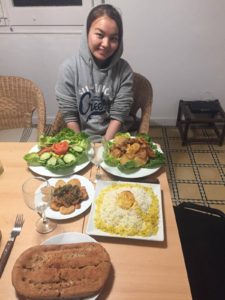 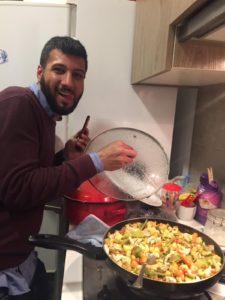 When there is a free weekend, some excursions fill the gap between the concrete of a “megacity” and the unlimited green-view of human nature. We went for hiking and finally we ended up doing archery, sharpshooting and flying on hills .. or almost flying .. or maybe just trying to fly.

Open Cultural Center office, for a day after that hike looked like a hospital room. 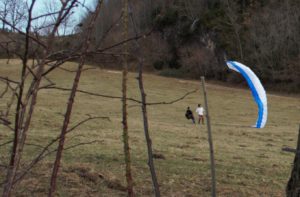 The volunteers have four Spanish classes per week, have begun to say their first phrases and to understand some Spanish phrases. We hope that next month our office will return to a Spanish speaking place. If you think that this is the most important change of the month, we will answer no.

Axel provides Arabic classes for us and the organisation’s members.

The most important thing is that we started a team. A team with some differences and a lot in common. People who want to help in a solidarity society, improve the level of live not only for a part of the world but all over it.