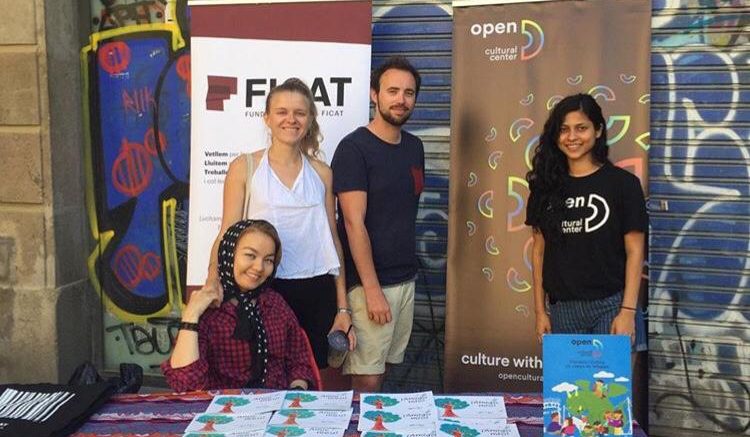 The Open Cultural Center may be a refugee-focused entity, however, its work isn’t just unique to this but instead covers a wide spectrum of different opportunities available to various target groups. From volunteering projects for refugees to internships for students, OCC does not see backgrounds and circumstances as hindrances but rather the potential to better people’s lives.

At the forefront of OCC is its renowned status thanks to its refugee work, and although this is undeniably remarkable, behind the scenes is a huge team comprised of a diversity of people from different countries and backgrounds who work tirelessly to bring the organisation together. At the helm of it all is OCC Barcelona’s main project manager, Mariia Iefimova. You could say that as the woman in charge of a mass of people, she never gets a day’s rest. Her job is anything but calm and she is always on the go, however, that’s what makes it worth it. The challenges that come with working at an NGO are all part of the process, and the words no pain, no gain, couldn’t be more apt to describe Mariia’s experience working at OCC. However, the most extraordinary part is the fact that Mariia is the result of OCC’s dream at improving the lives of those with fewer opportunities. Her rise was no walk in the park but from years of hard work, as she made her way up from an ESC participant to project manager.

Mariia has been working for OCC since 2018. Despite having lived in Spain for many years, Mariia is Ukrainian born and bred, thus, she of all people, is aware of the idiosyncrasies and cultural differences between not only Ukraine and Spain, but within the diverse nationalities and cultures she works with. The lure of the Mediterranean brought Mariia to Spain six or so years ago, and its lustre has kept her here. Initially a European Voluntary Service participant herself, Mariia started her Spanish journey in Valladolid, volunteering for the organisation Fundación INTRAS, mainly working in the areas of youth and education. Several years later, she found herself at the Open Cultural Center in the heart of Barcelona. As mentioned before, Mariia did not start her OCC journey from the top but was at first involved in a European Solidarity Corps initiative aimed at providing young people with fewer opportunities a job in the third sector with different tasks aimed at developing their skills and helping the refugee and migrant communities. There are many aspects to Mariia’s project, and although more intense than other ESC projects, it still reaps the same benefits, if not more. As with other OCC projects, it addresses inclusion, equality, and non-discrimination. Through hiring a young participant with fewer opportunities, like Mariia, the development of the organisation’s various projects is made possible. The main aim of the project is to increase educational and training opportunities for disadvantaged groups of people, such as the youth, refugees, and migrants at OCC, in order to help them integrate better in society. Due to her work at the organisation, Mariia has managed to create a rich work environment made up of a network of volunteers and interns from all over the world who all cooperate to make OCC’s inclusion and intercultural projects expand and become more successful.

Through OCC’s heavy involvement in the European Solidarity Corps, it offers a plethora of different projects and opportunities to disadvantaged and advantaged people respectfully. Through this, Mariia has helped raise awareness by developing new skills and gaining knowledge of working for a social cause. With Spain’s high rate of unemployment and lack of opportunities for young people, Mariia is the perfect inspiration to those with fewer opportunities who are struggling to find work, which is ever more prevalent these days. She can, without a doubt, account for the fact that people with fewer opportunities and cultural differences can participate in ESC projects to better themselves and their lives.

Throughout her time at OCC, Mariia has carried out a wide range of tasks from organising language classes for refugee minors to planning and participating in small to large scale events. Mariia’s main role is to tend to and manage OCC’s participants, be it volunteers or interns, and the organisation in Barcelona itself. This involves a herculean amount of effort of managing budgets, organising language classes, dealing with partnerships, dispensing tasks, and maintaining the overall day-to-day running of the organisation. Whether they are large scale events such as the World Tapas Fair and Fira Avicola, to name a couple, or small events such as our intercultural events, OCC’s events require a lot of cooperative effort of which Mariia is usually head of. In addition to this, she has also been involved with other OCC projects such as Fablab, a textiles workshop for third country nationals, along with the refugees at OCC. Whatever the work may be, Mariia will be found leading from the top. Naturally, from being greatly involved in many projects, she has a broad knowledge about what is required from an NGO, and what it involves. Her expertise at working in charities are second to none, and the proof is in her work and the success of the organisation.

There is nothing more special and empowering than a project manager who has derived from the same background, and who once participated in the same project, as some of her employees. Mariia is a product of OCC’s outstanding work at offering opportunities to those who need it most. She is the evidence and conviction that younger people need in order to realise that there are opportunities, and OCC provides them.